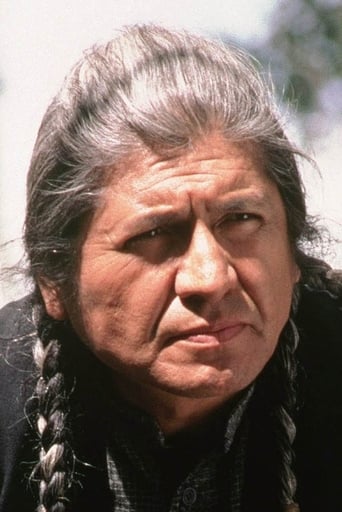 Gordon Tootoosis first acting role was in the film Alien Thunder (1974), with Chief Dan George and Donald Sutherland. He portrayed Albert Golo in 52 episodes of North of 60 in the 1990s. He is best known to British audiences for playing the Native American Joe Saugus, who negotiates the purchase of the Middlesbrough Transporter Bridge in Auf Wiedersehen, Pet series 3 (2002). Gordon appeared in the CBC Television mini-series By Way of the Stars with Eric Schweig as Black Thunder and Tantoo Cardinal as Franoise. He appeared in the award-winning movie Legends of the Fall (1994), and starred with Russell Means in Disney's Pocahontas (1995) and Song of Hiawatha (1997). In 1999, he and Tantoo Cardinal became founding members of the board of directors of the Saskatchewan Native Theatre Company. In 2011, he appeared in Gordon Winter at the Persephone Theatre in Saskatoon and Prairie Scene in Ottawa, his first stage role in 15 years. Tootoosis won a Gemini Award for his work on the animated show Wapos Bay: The Series and was nominated twice for his work on North of 60.